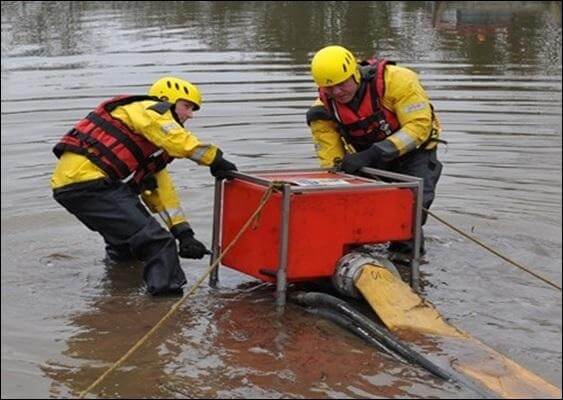 Hytrans high volume pumps were used to remove tidal floodwater from the Alkborough Flats in Lincolnshire in December 2013. The mobile Hytrans pumps pumped millions of litres of water from a large lake of floodwater formed behind a 3 metre flood barrier back into the Humber River by the Humberside Fire and Rescue Service. 2 people could position the portable hydraulically driven submersible floating pump units in the floodwater. The pumps worked well with salt water, mud and dirt. There was an east coast tidal surge over a 24 hour period and flood levels reached their highest on 5th December. Alkborough Flats is in an area of land around the Humber River which is below high tide levels. It comprises 440 hectares on the south bank of the Humber Estuary on the eastern side of the confluence between the River Trent and the River Humber. The site is a realignment site as part of the Environment Agency’s flood risk management scheme and recent tidal defence developments in the area cost 10.2 million pounds. The Flats managed to store a lot of the water from the tidal surge during this flood event and this prevented the floods being even worse in North Lincolnshire but water from the Humber breached new sea defences with sewage works, a car park and the surrounding area under deep water. Some sheep were lost. The surface of several miles of footpaths and access tracks were washed away and a lot of the site was affected by mud and sediment. Tidal surges due to sea level rise will be more common in the area in coming years. The UK government has many nationally deployable Hytrans pumping sets and these were ready to be used before and after the event.