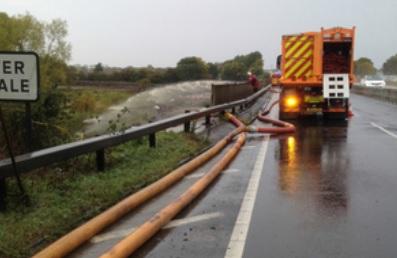 Highways England used a new Hytrans hydraulic high volume water pump to clear the M1 motorway of floodwater at Catterick on October 7th. It enabled the road to be re-opened in both directions after 10 hours instead of the 2 days it took to clear water on the northbound section of road after flooding in 2012. The mobile pump is located at Bradbury but can be deployed throughout the UK on motorways and A Roads. It can be set up in less than an hour and can pump super quickly at 50,000 litres a minute– that is equivalent to a typical backyard swimming pool in approximately 3 minutes!

At Catterick Highways England estimated that they pumped 2.5 million litres of water into the River Swale which meant the UK economy saved over £500,000 or $1M AUD as the Hytrans mobile high volume water supply system was used to quickly dewater the flooded A1.